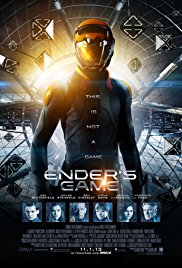 Decades after a brutal attack on the human race by aliens, children are now used as generals to coordinate fleet attacks: their reflexes are faster, their thinking has yet to be stymied by age, and they don’t quite comprehend the concept of death. With a new attack imminent, Earth’s defence forces put their faith in a 9 year-old who appears to be “the one”.