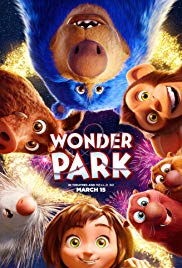 Bright and imaginative 9-year-old June spends her time with her mother creating an imaginary theme park called Wonderland, populated by incredible rides and talking animals. After a tragedy strikes, June runs into a nearby forest and finds herself magically transported to Wonderland, where she meets all of her previously imaginary characters and helps them in a war against an evil force that has invaded the park.